Older DJI drones are not, they fly by themselves.
They also have an extra AIRCRAFT Setting:
“Exit Waypoint Mission on Signal Loss: Off/On”

Waypoint Missions are NOT drone depended.

When the same mission is used with a newer drone (VSC-drone), it’s controlled by VSC the moment you hit start and takes off immediately.
The ‘AIRCRAFT’ setting ‘Exit Waypoint Mission on Signal Loss’ is not available with these type of drones (VSC-drones).

VSC:
Every 10th of a second (I believe it is) Litchi sends a control signal with tasks to the drone, so the drone knows what to do, then the drone sends a feedback signal to Litchi, so litchi knows if the drone executed these tasks and were executed correctly, now Litchi can workd out the next set of tasks to send to the drone.

When either of these signals do not arive at their destination, even for 1/10 of a second, trouble starts, like strange behaviour of the drone.

When this interruption takes too long (Signal lost), the mission is aborted and either ‘Return to Home’, ‘Hover’ or ‘Landing’ will initiate depending on the AIRCARFT Setting ‘Signal Lost Behavior’. 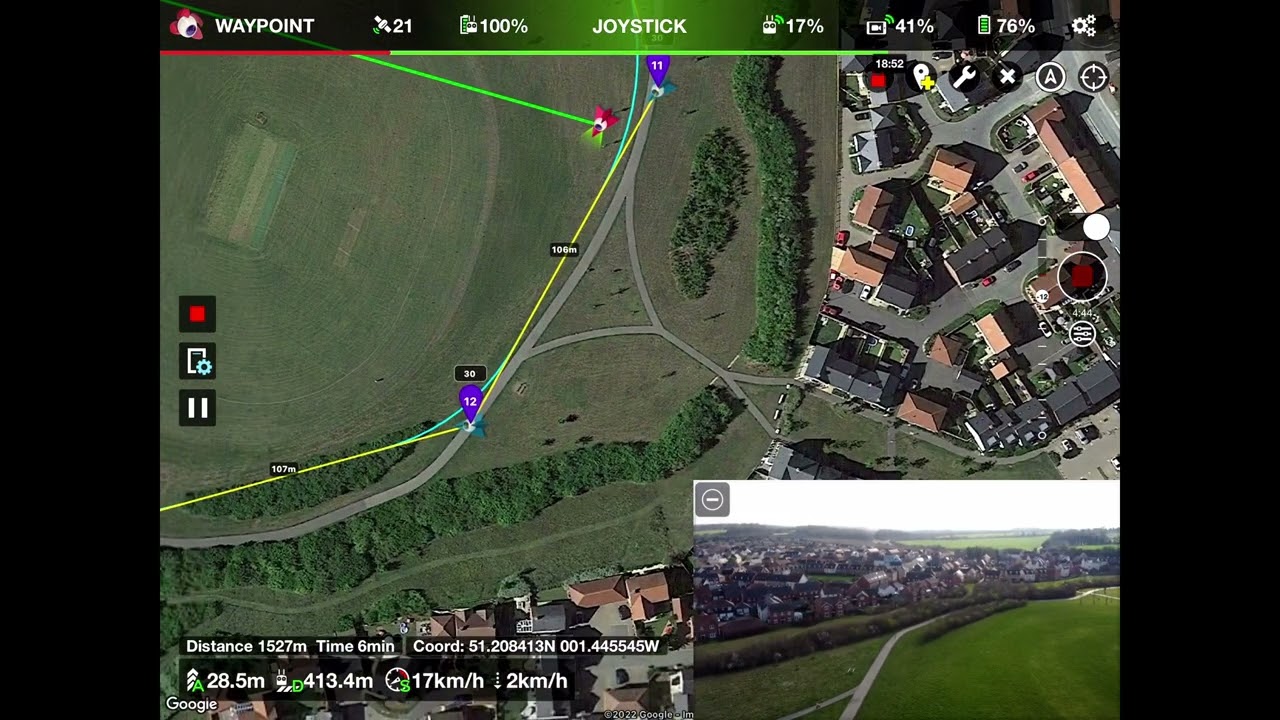 Nice representation of loss of signal. Thanks

Thanks TriBand for your clarifications. I believe this is my problem that I have had and posted in another post. DJI is putting more and more limits on drones than him and that’s not good for all of us. I hope Autel increases its potential and acts as a real alternative to the overwhelming power of these “Bullies”
Giuseppe

DJI is putting more and more limits on drones than him and that’s not good for all of us.

Of course, this is certainly the main reason.
But I also think of a strategic reason of DJI and that of excessive market power.
I really hope Autel gets past it.
Giuseppe

Its going to be the same for all drone manufacturers though especially in europe and the UK, where one thing they seem to be tightening up on is flying VLOS, so if the drone manufacturer wants a "C" label for its drone, its going to have to make sure that it can’t be flown beyond VLOS, hence the removal of the ability to store waypoints on board so the controller isn’t required

Thanks for the input, Martin.
Is there any way to know which drones allow storage of waypoints?
I understand these are primarily older drones but also read that perhaps enterprise models are also included…
Thanks for any input.

A general rule of thumb is if it uses DJI Go4 as the default app then it will allow storage of waypoints, if its on DJI fly, then you’re out of luck

For my MINI2 I now only use LITCHI.

I use DjiFly for FIRMWARE updates

Often the loss of signal is caused by many things.

On my Smartphone I turn off Wi-Fi and bluetooth, by doing this I have seen signal improvements

I understand the reasonings people are giving for DJI to move to VSC vs onboarding but why couldn’t they have simply left it the way it was and added a protocol wherein the drone must initiate RTH if it loses contact? Maybe that’s something people could create a hack to get around.

I have an entire small business based upon mapping and construction project progress monitoring and for years and years I have used my phantom 4 pros. I fear one day they will quit working and I’ll be stuck. I bought a Mavic Air 2s to play with waypoint missions and, when windy, they are atrocious by caparison, certainly not deliverable. I haven’t tested mapping w VSC yet but I’m also worried there because some sights are 300 acres and while I don’t lose signal it does get very weak.

I have an Air 2S also and I agree that VSC is not very good for professional photography. However eBay has many reasonable offers for older drones with the ability to finish mission without the worry of RTH. This is an auction with a Mavic 2 Zoom that is about to end in about 9 hours from a HIGHLY RATED Seller. DJI Mavic 2 Zoom Camera Drone w/ accessories. Excellent condition | eBay (It helps to wait until the very end to put in a final winning bid since this helps avoid bidding wars!)

Thanks for the link. Thing is I have 10 Phantom 4 batteries so I’m more or less forced to just keep buying more Phantom 4s.

The biggest issue I’ve had is that I’ll have a simple issue with a drone, like a gps module go bad. I’m not one to work on my own electronics so I’ll send it to DJI and they’ll charge me a couple hundred bucks to fix it and then they’ll ship me back a different refurbished drone. It comes with a 90 day warranty and about half the time something totally different goes wrong and I get a free replacement that is yet another different drone. You get the idea; after 8+ years of Phantom 4s being repaired and reintroduced I can’t rely on them anymore. I have to bring two to every job. My hope was to sell all of it and by a new Mavic 3 Enterprise and a pile of batteries. But if my VSC experience with the Air 2s is any indication of what’s to come I may just be out of luck at some point. Mind you I have completed missions with my Mini 2 that looked great and that’s why I think it may have to do with the wind more than anything. A VS command can’t obviously predict the wind that’s coming in the next fraction of a second.

I understand, you can’t predict the weather accurately every time. I think what makes the VSC so twitchy, is that when there is a signal delay or some kind of interference, the drone then plays “Catch Up” with the signals. So it may hesitate only to suddenly speed up when the signal returns in order for the camera to be pointing where it is supposed to at a specific point in the mission. I noticed something like this with the actual flight but the Virtual Litchi Mission was smooth like the earlier drones would have done. Good luck!!

added a protocol wherein the drone must initiate RTH if it loses contact?

That setting is already in DJI fly, and is stored in the drones memory

DJI has never officially given a reason. The only thing DJI has said is that the SDK (and waypoints) will only be supported in their “Enterprise” drones and that they currently have no plans for SDK support for their latest consumer (Mavic 3, Mini 3 Pro) drones.

I have seen many conjectures given by the community but so far, but nothing officially.

That setting is already in DJI fly, and is stored in the drones memory

I believe that jiggyb21 is insinuating that DJI could have continued on-board support of waypoints but limiting their use to having a constant connection to the RC. This would have improved the quality of waypoint missions while limiting them to being within RC control for safety reasons.

@jiggyb21, if I have misconstrued your intent, please feel free to correct me.

if I have misconstrued your intent, please feel free to correct me.

That is precisely what I was trying to say. Thank you.

I just read that DJI officially stated that Enterprise drones will indeed be able to onboard. I’m pulling my hair out because I can’t find the source now. Without it I’m just spreading even more rumors. If that is confirmed to be the case then I would buy the Mavic 3 Enterprise right now as that would basically solve my problem. Having said that I understand it will take some time until the SDK can be adapted to the likes of Litchi etc.

Having said that I understand it will take some time until the SDK can be adapted to the likes of Litchi etc.

Yes. DJI has begun a totally new version of their SDK for the Mavic 3 Enterprise. This new version (v5) is not compatible with the previous version (v4) which is used by Litchi to support all previous DJI drones. Since both SDK v4 and SDK v5 cannot be used at the same time in one piece of software, it will require that Litchi create a whole new app for the SDK v5 drone(s).

I see. That makes a lot of sense. I hope there are tangible improvements that result from moving to sdk5 and it wasn’t simply a move by DJI to implement these new types of restrictions in the easiest way possible.

And thanks for your clarification. It really does help me as I contemplate how to move forward.