Hi, I’ve just flown my first Waypoint Mission (running iOS) with my Mavic 2. But had a problem with the Mini 2 stopping when it gets to a waypoint, It just hovered at the waypoint. The Setting>Path Mode was set to Straight Lines. 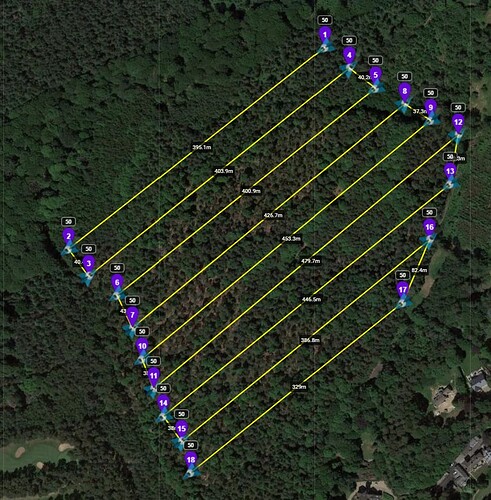 When it stopped I could restart the mission and tell it to start the mission again but start at a different waypoint but when it arrived at the next waypoint it would stop again.
The camera was set to take a picture every second, looking down (I’m trying do do some photogrammetry of an iron age hill fort).
Is this how it should work? Should I be triggering the next waypont from the controller? Any clues?

It also disconnected after about 15 minutes but that a different story! It eventually RTB’s safely. Phew.

Interruption/loss of control signal betweeen the drone (mini 2) and controller is most likely the cause.
Have a look at this topic:

Virtual Stick Commands are control signals constantly send from the remote controller to the drone (stick simulations), and feedback signals constantly send from the drone to the remote controller. They depend heavily on a Constant Good control signal. DJI Drones that are build for the DJI Fly App are controlled by VSC during waypoint missions. (Mini-1-2-SE, Air-2-2S & Mavic-3) Older DJI drones are not, they fly by themselves. They also have an extra AIRCRAFT Setting: “Exit Waypoint Mission…

Use curves at waypoints and then the drone does not stop.
Larger curves = smoother turns.
Better to extract photos from the video at every X frames.

archer: I’ll try the curves mode next time. Still don’t understand what the logic is for stopping at a straight waypoint leg. Is this a bug?
As for the photos/video stills: I was hoping to get more resolution out of the still picture rather than the video frame. Also I know that the still picture has geo location meta data embedded. Will a frame grab from the video have this data?

TriBar: I don’t think it was a virtual stick issue as I had good links and could stop the mission and restart from the app. I had good links until it stopped for good! After it had RTB’d and was hovering over the home point,I was about 5metres away , there was no data being sent to the app. It was as though the app had crashed. I landed manually (used the down stick) OK. The controller was reading (ie audio outputing) the battery percentage - it got very low! but it was not being displayed on my phone screen. Strange.

Next time I’ll try and screen record as well.
All good fun and keeps the heart rate up!

Must stop, but then must continue the mission