In DJI fly app you can adjust Yaw rotation speed and smoothness but that is not working in Litchi using WP missions using user controlled heading where it is very sensitive to control yaw - almost impossible to make smooth transitions.
Gimbal smoothing seems however to work.

If you open DJI Fly and set the appropriate settings in normal mode the drone remembers them for when you open Litchy. Very clunky in my opinion.

I did what you proposed- the problem is that the YAW smoothness is not recognized in Litchi wp sessions only gimbal smoothness is.
My example: 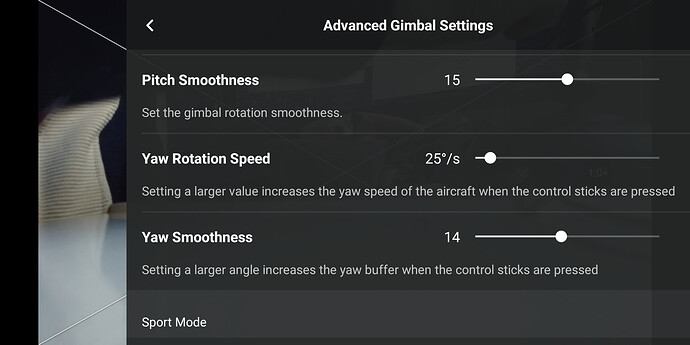 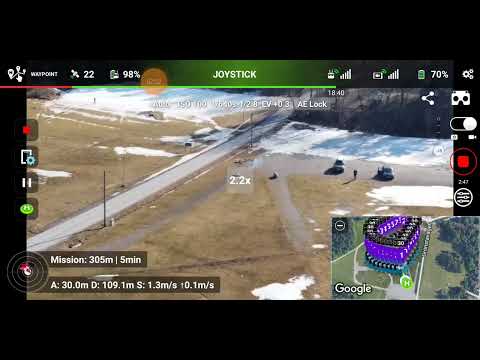 If you deleted 20 of those waypoints it would help to smooth out the mission .

The use smoothness in litchi on a mission is going to be determined surely by the curve radius, so as archer says less waypoints are going to make it smoother

I did what you proposed

Show smooth flight in dji fly with these settings

I believe that you are missing the point.
Curve radius is set to 75% witch gives a smooth flight when I do not engage manual YAW - that is not the issue.
The issue is: Manual yaw is very sensitive regardless of smoothness settings in DJI fly app during Litchi WP missions
Smooth YAW works great using DJI fly app.

Have you tested manual YAW yourself in WP missions using Litchi?

I don’t understand why anyone would want to use jerky and clunky manual yaw control
in a litchi mission when the whole point of litchi software is to enable the flyer to make
smooth and seamless yaw transitions by using waypoints and points of interest.

Then put the blame on to litchi for not making smooth transitions when not using those
built-in functions.

The reason we want to use manual yaw control is that the current version of Litchi when set to auto is not smooth enough for professional use. To overcome this limitation I currently disable gimbal control and switch to manual heading when using waypoints which provides much smoother footage. Urkman is quite correct in saying it is difficult to get smooth yaw control in the current app due to the fact that it is not responding to the yaw setup in the DJI Fly app.

Let me give an example where this feature would be welcome.
I want to fly in an area close to obstacles like treelines, trees, lightpoles etc.
I can do it using a Litchi WP mission that avoids those obstacles with straight lines or curved turns.
First I will test the flight with the camera pointing to next waypoint without hitting anything.
Then I will fly the path being able to look/film in any direction without the risk of a crash and with smooth turn of the camera and gimbal.
Having done this once I can easily repeat it finding new objects to film.

It’s been my experience, too, that auto tracking to a focus point is smooth for gimbal motions, but jerky for yaw movements. The jerks are present in a straight-line mission when tracking a focus point to the side of the flight path, and they are apparent during “smooth” turns. Smooth turns seem to be made up of short straight-line segments, and there is a jerk at each transition of the curve. So, anything that necessitates a yaw motion of the drone to autotrack to a focus point will jerk. Hope this gets addressed by litchi.

Use a lower airspeed. You are flying 20km/h but want a smooth camera roll.

What drone are you using ?

Observation: In DJI Fly, to set the speed and smoothness parameters for pitch (gimbal) and yaw, the drone must be connected, suggesting that the smoothing algorithms for both are executed in the drone firmware, not the RC app. I believe DJI did this because the information bandwidth in the link could not support smoothness.
Speculation: The API released by DJI exposed the smoothness commands for pitch, but not for yaw. The litchi development guys are really, really smart, and they would have used smooth yaw if it were available to them. Imploring them to fix this may be beyond their ability to do so.
Speculation: litchi is limited by the link framerate, with a new yaw command every tbd seconds, and that’s the source of the jerks.
Conclusion: So moving slower diminishes the jerks because they are smaller, Looking down a bit during turns to take the horizon out of the view may help too.

I’m going to focus on jerk minimization through a series of test flights varying anything I can think of, just to learn the possibilities. I don’t want to hijack this thread, which has helped me tremendiously…
I fly a Mini2, incidentally.

I’m currently flying the Air2s and the Mini2. Before that I flew the M2 pro. The fully autonomous waypoints mode on the M2 pro performed perfectly with Litchi but it appears that DJI in their wisdom have no plans to carry this mode through to other consumer grade drones. From what I understand Litchi are using virtual sticks mode to get round this issue but this is currently is not producing smooth video. My solution is to use Litchi to fly the drone using waypoints and I handle the camera. That’s why the smoothness of the yaw settings are important to me.

I have arrived at the conclusion that whatever improvements to
their software that DJI and Litchi will make, the Mini 2 will always have
some twitchy yaw movements.
Because the Mini 2 is just too light weight to control smoothly and effectively.

My Mavic Pro 2 does not have this problem because it has three times
the mass and inertia, like a heavy bomber in comparison, which heavily damps
out any chances of making jittery yaw movements.

JacktheRipper
Thanks for your valuable analysis - it brings this thread to new levels.

Looking forward hear what Litchi has to say about this

That’s absolutely not the reason.
The Mavic 2 Pro is NOT controlled by Virtual stick Commands.
The entire mission is uploaded to the drone and flies the mission completely by itself, even with the remote controller turned Off.

My advice, do not make the same mistake as I did… Don’t sell your M2Pro!