This issue is driving me CRAZY! Please fix this waypoints bug!

Hey, Litchi developers, you need to focus your attention on this one! There is an issue with Litchi Waypoints engine where it gets “stuck” on a waypoint and then starts to fly round it in circles/lines and never proceeds with the mission. Tried everything, disabling obstacle avoidance, restarting the mission, sometimes that fixes the issue, like, it circles the waypoint around 30 seconds and then proceeds with the mission, but sometimes it just doesn’t…

After 3 failed attempts to restart the mission from waypoint 7, I just went into RTH and switched back to DJI Fly, that’s why the log ends there.

It got stuck on waypoint 7, and circled it…
It wasn’t windy during the mission, about 15 km/h winds.
I am happy to provide any other information you need

But please, fix this! 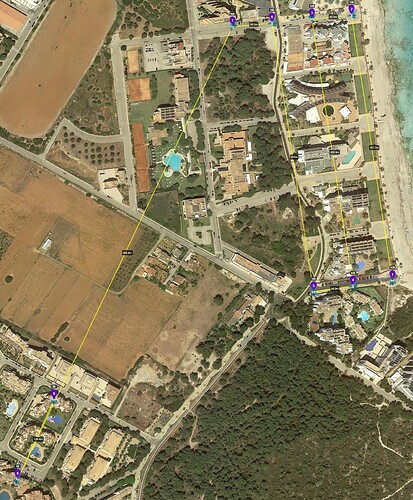 Virtual Stick Commands are control signals constantly send from the remote controller to the drone (stick simulations), and feedback signals constantly send from the drone to the remote controller. They depend heavily on a Constant Good control signal. DJI Drones that are build for the DJI Fly App are controlled by VSC during waypoint missions. (Mini-1-2-SE, Air-2-2S & Mavic-3) Older DJI drones are not, they fly by themselves. They also have an extra AIRCRAFT Setting: “Exit Waypoint Mission…

I had 4 bars of signal (both control and HD video) in Litchi app while this was happening. I had missions run successfully on this drone with much worse signal.

A quickie visualisation of your flight mission.

Looks like an intermittent signal fault from the controller
but not by buildings getting in the way.

Drone seems to have had a terminal heart attack at waypoint 7
suspect dodgy cable to the phone on the controller.

Maybe you should change the cable or try a different
Iphone / Ipad and try the same mission all over again. 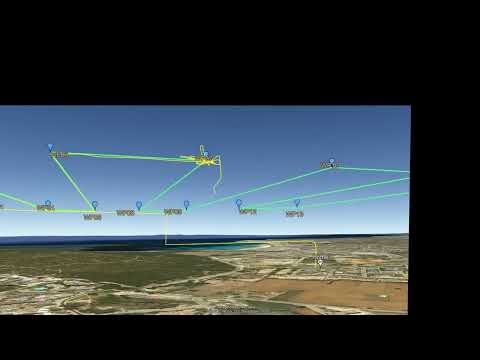 After 3 failed attempts to restart the mission from waypoint 7,

I have had a bit of a re-think here, maybe not a loss of signal at all.

There may be a glitch in the program preventing
smooth flight after waypoint 7.
The drone was going along quite good in the mission up to waypoint 7,
then it crashes.

Go back to litchi hub on the computer and move waypoint 7 around a bit,
check all the settings for waypoint 7, change the height a little.
Then re-load the mission.

@archer
“There may be a glitch in the program”

The glitch is not in the program, it’s in the control signals.
Signal strength has nothing to do with this issue.
Signal interruptions do.

Imagine a drone is some 30 meters away behind a big tree, branches and leaves moving with some wind.
Control signals get interrupted by the moving branches and leaves, but when not interupted, signal strength will be 5 out of 5 bars.

Besides that he’s flying in an urban area where there will be strong interference, certainly from the building beneath WP7 and the buildings surrounding the Homepoint, and the used protocol is CE, not FCC (Spain).

The M2P is NOT a VSC-drone, it will complete any waypoint mission even with the controller turned off.

Waypoint 7 is behind building on opposite side of street. 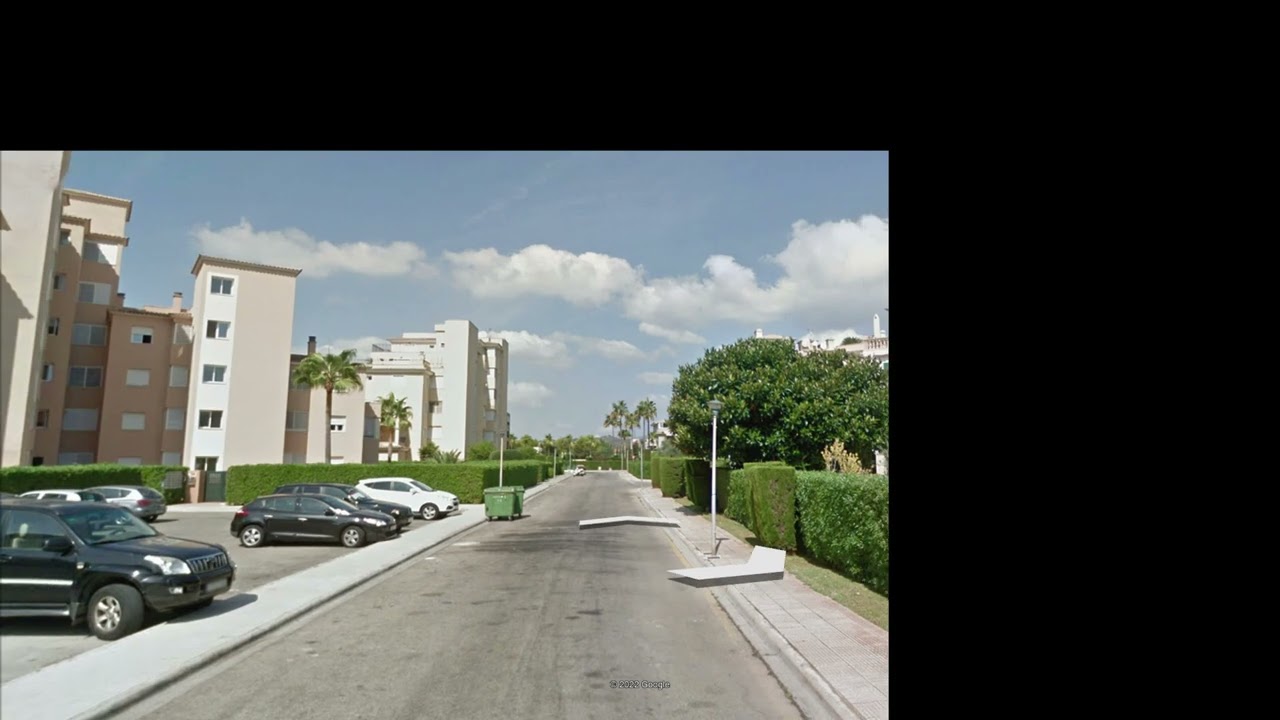 Yaroslav needs to stand under waypoint 1 to launch drone
for un-interrupted signals for entire mission.

Yaroslav needs to stand under waypoint 1 to launch drone
for un-interrupted signals for entire mission.

Just to mention, I was standing on the top, on the rooftop of my apartment, perfect signal from there on 120 meters height. I can fly to 6 km from there, and the drone wasn’t even 1 km away. Maybe it’s an issue with litchi not being able to control the drone because of the lack of commands, because the radio link slows down.

Guaranteed solution to this problem = Buy a Mavic Pro 2

Create a waypoint mission using Litchi Mission Hub, and then go along for the ride by monitoring the Litchi screen during the mission.

If the RC signal disconnects during a Litchi waypoint mission, there is no cause for alarm because the drone will continue to follow the programmed flight path until it returns to within RC signal range, at which point your video feed will be restored, provided of course that you remembered to go into Litchi settings to insist that the drone continues the flight path if the RC signal is interrupted or lost.

You will get much smoother camera panning sweeps if you preset camera horizontal directions at each waypoint along the Litchi flight path, than if you fly manually and control the camera with RC yaw inputs. Also, you can throw in multi-loop orbits around points of interest with that same fluid and gradual camera panning action that Litchi does so well.

Check your flight path for obstacles by flying a trial run at say 240 feet AGL so as to allow adequate vertical clearance above cell towers, then after reviewing that exploratory footage, you can lower the altitude at each waypoint by gradual increments over subsequent flights.

the drone continues the flight path if the RC signal is interrupted or lost.

This does NOT work with drones build for the DJI Fly App (VSC-drones).
Yaroslav is flying a Mavic Air 2 !

if you fly manually and control the camera with RC yaw inputs.

This only works when ‘Heading Mode’ is set to ‘Manual(UC)’,
at the same time:

You can not do this when ‘Heading Mode’ is set to 'Manual(UC).

can throw in multi-loop orbits around points of interest

NOT possible within a Waypoint Mission.

I must clarify that I only use Litchi’s waypoint mode and nothing else, so Heading Mode remains a mystery to me thus far. Also, I agree that newer drones utilizing the infamous Virtual Sticks protocol are not capable of flying waypoint missions beyond RC signal range. My drone squadron comprises a Phantom 3 Standard, Phantom 3 Pro, a Mavic Pro 1, and a Mavic Pro 1 Platinum, all of which are trusty museum pieces that store GPS waypoint data onboard and are therefore capable of completing waypoint missions far beyond RC signal range, unlike the newer drones which default to RTH the instant RC signal falters during a Litchi waypoint mission. Older DJI drones offer me a way better bang for my buck, and besides, I’d need to sell my mother-in-law to raise enough money for a newer drone.

All told, and after much trial and error, I have over time amassed a thorough working knowledge of Litchi’s waypoint capabilities so I can state without a shred of doubt that one can indeed program multi-loop orbits with the Litchi Mission Hub, before flying such missions with absolute reliability each and every flight. 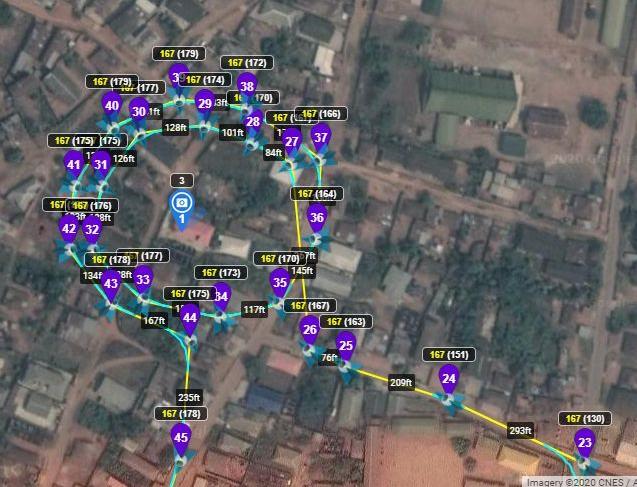 Above is a simple double loop that I recently programmed with the Litchi Mission hub. By setting the house in the center of the loop as a Point of Interest, Litchi automatically adjusts the horizontal camera direction so the camera remains trained on that house during the entirety of both loops.

The above is a simple double loop flight segment, but I have many others that involve triple and even quadruple loops at varying altitudes around multiple points of interest in sequence, hence my certainty that sending the drone to fly highly complex looping orbits is a thing of ease and beauty to behold, with Litchi.

Part of the confusion is your use of terminology. The word “Orbit” in Litchi is used to describe a specific flight mode selectable from the main menu. Litchi’s orbit cannot be made part of a waypoint mission. What you have done is arrange a number of waypoints in a circular pattern with a POI at the center. That is simply a waypoint mission. Using the term “Orbit” makes us think of Litchi’s “Orbit” flight mode.

@Mad_Pup
“I must clarify that I only use Litchi’s waypoint mode and nothing else, so Heading Mode remains a mystery to me thus far.”

Ah, I see. I used the word orbit, without realizing it is a specific term used by Litchi, so yes I am referring to simply arranging waypoints in a circle around a point of interest. I need to read the manuals a bit more so I can avoid using ambiguous terms here.