Greetings, I wonder if anyone can help? Can I use Add Polygon or Add Path in Google Earth Pro instead of adding Placemark to trace Waypoints and export it to Mission Hub to set speed and camera angle?

However, I have created a utility that allows one to create a circle in Google Earth Pro and convert that into a spiral mission in Litchi’s Mission Hub.

Since the purpose of Litchi’s Mission Hub is to graphically design missions using a Google Map for reference, I’m curious why you would like to use Google Earth Pro to create that path?

For me, I like to use Google Earth Pro because I can force use of 2020 imaging rather than the default 2015 data used by Litchi. Primarily because I operate in an area in which hundreds of wind generator towers have been constructed since 2015.

My computer is still showing 2015 maps. If it were 2020 imaging, I would be seeing dozens of wind generator towers in my back yard, so to speak.

Google maps in my area are 2020 or newer as it is showing the early construction of a school going up in town.

Litchi, Mission Hub on my PC is showing 2022

According to what I’ve read, Google Maps and Google Earth are supposed to show the same imagery. When zooming in using Google Earth, it will tell you in the lower-right corner the exact date of the satellite imagery.

Google Maps always says “2022 Imagery” regardless of the actual date of the imagery. Satellite data is updated constantly for both Google Earth and Google Maps. However, the updates happen much more frequently in populated areas. Updates in sparsely populated areas can take several years.

Would you be willing to share the location you are looking at?

Litchi, Mission Hub on my PC is showing 2022 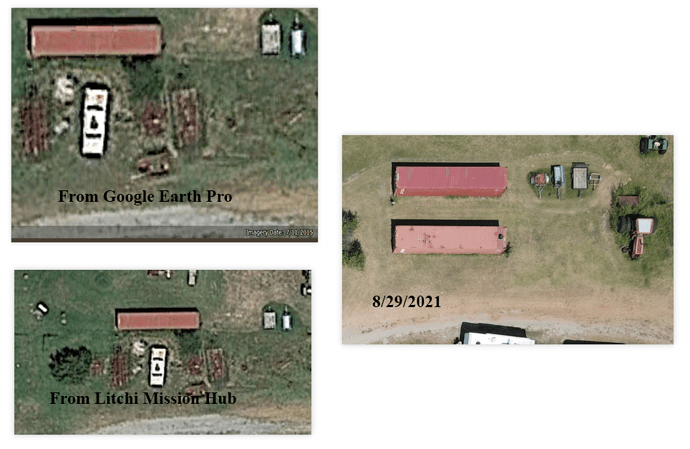 I personally cleaned up this junk pile and moved in another container in 2016.

Google Maps is not the same as Google Earth Pro.

While this has been an interesting discussion of imagery dates displayed by various applications, I think it illuminates the point that perhaps we should all be a little more careful in making definite statements about specific “facts” without knowing all the variables potentially involved. 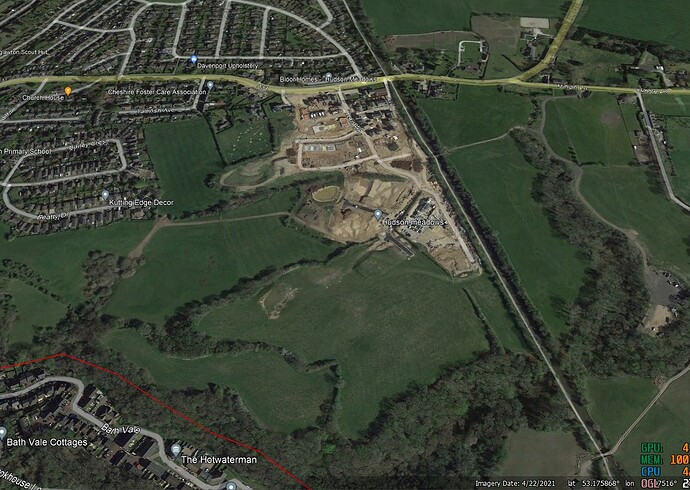 This is the image of a housing development in Google Earth Pro, you can see that the image is dated 04-22-21 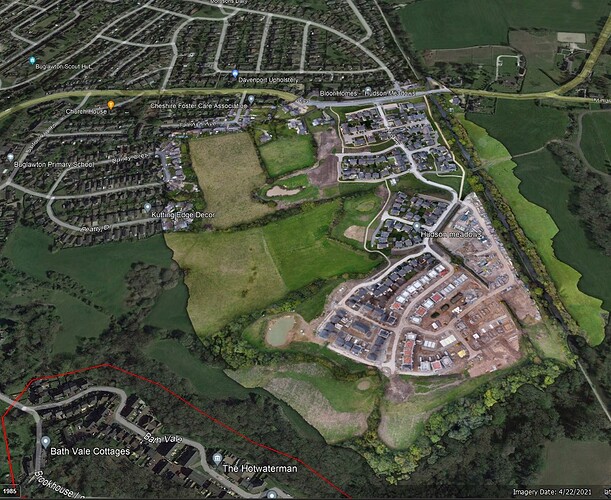 This is an image that I created in October this year of the development imported into Google earth Pro as a super overlay, it tokk less time to import than it did to type this post

You are correct that the “Imagery 2022” note shown at the bottom in Google Maps does not mean that the imagery was captured in 2022. It’s just a copyright notice.

I’ve been reading the Google support pages about the issue you raise. What I have learned is the following:

I’m sure you already know this, but for everyone else’s benefit:
To see this newer imagery, you just select the “Historical Imagery” function icon in the lower-left corner. 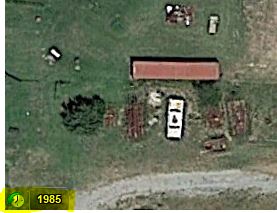 Selecting this will bring up an slider where one can select from all available satellite imagery. Normally, this is only used to view historical imagery. However, in the case you have highlighted, there is newer imagery.

So, the question becomes: “If there is newer imagery, why doesn’t Google display it by default?” According to those responding in the Google forums, newer imagery may not be used by default for a number of reasons including cloud cover or poor resolution. In this case, the 2015 imagery is much clearer with fewer shadows than the more recent, 2020 imagery. That would be my guess as to why Google is not displaying it by default. One will just have to wait until newer and clearer imagery is available.

Google Maps and Google Earth Pro are supposed to show the same imagery by default. This aligns with what I have experienced so far.

I won’t argue your statement at all.

To throw some more confusion into the mix, The Maps app on my iPhone (which is not Google Maps) displays an image quite similar to the one I took with my drone (dated 8/29/2021).

As an aside, people trying to use their phone to locate my shooting range sometimes get lost. If they use Google Maps their phone will put them in the driveway. If they use Maps (the iPhone default), their phone puts them a mile north.

your own up to date aerial imagery and y

However, I usually don’t have my own imagery until after the mission has been flown.

“I usually don’t have my own imagery until after the mission has been flown.

” As a former military pilot, I am sure you can appreciate a good RECON before the primary mission.