Hi everyone… first post and a question as always.

I’m interested in Litchi for a few reasons… one was that i was told you could fly in a straight line (not a planned route) and Yaw at the same time… is this correct when using Litchi with a Mini 2?

The other main question I guess is … is my device going to work with it?

I have a Redmi Note 5 64gb. if it doesn’t work everything else is academic. appreciate your insights please.

I’ve used Litchi on a Moto e6 and a Samsung Tab A, both devices that wouldn’t even open DJI Fly, to operate my Mini 2. Both devices have 64 bit processors.

And yes, you can also do it in waypoint missions.

An interesting way to complicate your life.

The litchi has a focus mode and a course lock mode for that.

The litchi has a focus mode and a course lock mode for that.

In Focus mode the camera focusses on a POI, so NO free yaw movement.
Course Lock only works with drones that support it natively, so NO Mini, Mini2, MiniSE, Mavic Air2 and Mavic Air 2s.
As you like to say: “Have you red the instructions?”

that is useful information… appreciated

Rth on mini 2 also does not work.

And poi can be moved while flying

No RTH function with Litchi on a Mini 2?

I’m surprised at that… it is a useful failsafe with the DJI Fly app. I like the sound of planned missions but not to have RTH is a bummer… as it is at present anyway…

Thanks for the heads up.

And poi can be moved while flying

Gimbal/camera Pitch is still locked on the POI.

I’m guessing as it is only a few month since the launch of Mini 2 version there will be some glitches before it is considered stable?

Thanks for that. it helps me

Rth on the remote still works.

rth not working in litchi app.

Your best bet is to use waypoint. Specify the flight route and freely rotate the gimbal.

you mean rotate gimbal up or down? Mini 2 cannot move camera in any other direction…

During way points you can rotate and move the gimbal. Use way points to set course and speed.

With these settings you can freely/manually control Yaw & Gimbal Pitch while flying from WP1 to WP2.
Yaw/Heading Mode means rotating the aircraft.
Gimbal Pitch means pointing the camera up/down. 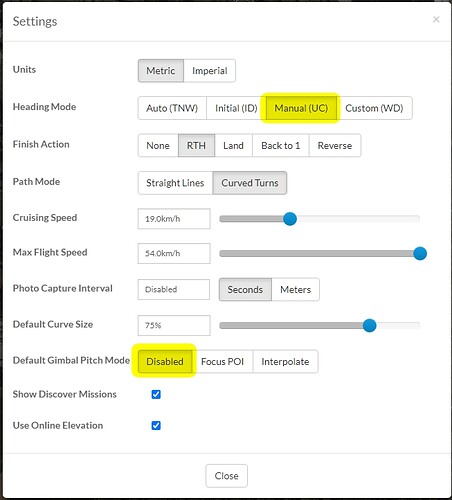 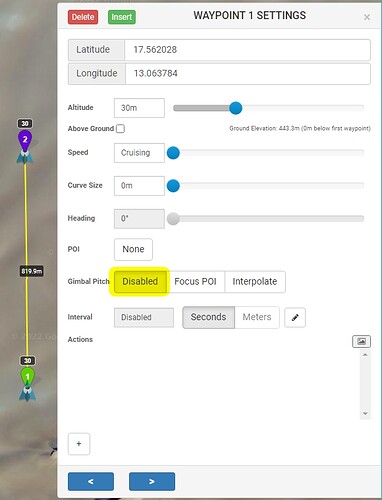 Image result for using Litchi with a Mini 2 Litchi for iOS is not yet compatible with Mini 2, Mini SE and Air 2S as DJI did not release an update for the iOS SDK yet.
As it is available on the Amazon app store for devices that do not support google services. I tried it. This includes devices from brands like Huawei as well as DJI monitors. The DJI RC Pro is not yet compatible. When DJI adds support for the RC Pro in the SDK, we will add support for it in Litchi.

Mavic Pro Platinum
If I make flightplan with litchi and use curved turns, the camera sometimes does not want to focus after I hit record. If I hit the “green” spot on screen to focus, it does focus, but just after that it return to the blurry mode.
It is set to AF